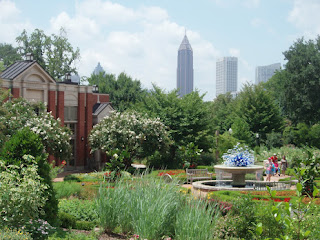 But because this post started with Atlanta, I should say something about the city of Chicago.  While I don't yet know Chicago well, it also looks like a beautiful, livable place, on the shores of a (literally) great lake.  The people seem friendly, and there is a lot to do.  I just hope that, after being spoiled by Atlanta, I can get used to Chicago's cold winters.
Posted by Lev Reyzin at 10:54 AM