Recently, the academic community started to fight back against traditional academic publishers, who earn large profits without any longer providing many clear services.  The internet has been a great tool for taking care of such inefficiencies, and it's quickly disrupting the publishing market as well.

Having thought a bit about these issues myself, I wanted to summarize my views of some of the various publishing models (as described by Tim Gowers) under consideration, as well as the pros and cons of each.  It's possible, even likely, that I am missing something, so feel free to point it out in the comments.

screenshot, after I tried to access a paper from nature.com

system: Researchers send manuscripts to publishers. Publishers have volunteer editorial boards consisting of researchers who decide whether to accept/reject manuscripts. Accepted manuscripts are published but cannot be accessed without a paid subscription to the given journal. Authors lose most (or all) rights to their own work.

who loses: university libraries and therefore scientists who pay for it with overhead; the public, who doesn't get access to the research their taxes likely funded; authors, who cannot easily have their research read and used.

opinion: This system made some sense before the internet era, where there were few other good ways to disseminate research. The publishers used to have to work hard for their profits by doing serious formatting/printing/publishing work. With the internet, all of this is now done by the authors, and the closed-access system no longer makes sense.

system: Same as closed-access, except that authors are allowed to put their accepted manuscripts on their websites and onto online repositories such as the arXiv.

who wins: publishers, by charging for access; researchers who put their papers online

who loses: basically same as closed-access, except for the authors who put their papers online

opinion: This is the system most journals are now on, or at least they usually don't go after scientists who keep their papers online. This is strictly better than closed-access, but doesn't go far enough. Too many scientists do not put their papers on their websites or arXiv. There is still no guarantee that science will be public, as it should be.

a screenshot of the new gold-access math journal

system: Researchers send manuscripts to publishers. Publishers have volunteer editorial boards consisting of researchers who decide whether to accept/reject manuscripts. Authors of accepted manuscripts pay to have their work published but published manuscripts are freely accessible to everyone online.

who wins: the public, who can access research for free. the publishers, who still get paid (but not as much)

who loses: the authors, who have to pay (usually large sums) to have their work published. universities, which might need to subsidize the fees. quality (see below).

opinion: I think adopting this system would be a mistake. First, scientists are the ones doing the work, the editing, and the main contributions -- it seems unfair to make them pay as well. Researchers without grants or university support would have to use their personal funds. Moreover, I think this would seriously impact paper quality.  In this system, journals would make money by accepting more papers as opposed to getting more readers, and some authors may have incentives to pad their CVs. I cannot see how this wouldn't go wrong.

the journal of machine learning research, image from their website

system: Researchers send manuscripts to publishers. Publishers have volunteer editorial boards consisting of researchers who decide whether to accept/reject manuscripts. Authors of accepted manuscripts have their work published for free and published manuscripts are freely accessible to everyone online.

who wins: scientists, who can publish for free and have their papers read. the public, who can access research freely. universities, who do not have to pay for journal access. research quality.

who loses: publishers, who cannot any longer charge for anything

opinion: This is the best of all worlds. Everyone seems to win, and research quality especially wins because nobody makes a profit from publishing bad results.  The only problem is that the publishers lose, and why would anyone run a journal without making a profit?


Diamond-access is the best system for everyone, except for the publishers.  However, publishers need incentives to run a journal, which they wouldn't have in a diamond access system.  Now, becoming a publisher would involve operating at a loss.  So who should take the hit?

One obvious solution is for universities to publish (or pay for publishing) journals.  They would make a sacrifice in maintaining the journals for free, but what would they win? Quite a lot actually.  Were we do switch to this system, university libraries would no longer have to pay subscription fees to journals, and the university professors wouldn't have to pay to have their work published.  And the quality of publications wouldn't suffer.   Some of this cost could even be handled by overhead. 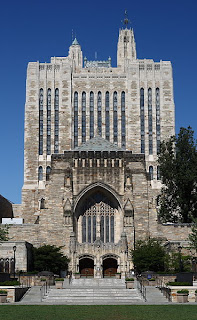 Yale's library (from wiki), where I not once went to do research during my Ph.D.

But what is the cost of running a diamond access publication?  Well, it turns out to be very small.  With pdfs online, there's really no need to publish paper proceedings.  I don't think I've ever gone to a library to find an article on paper -- pretty much nobody does these days.  So, all you need to do is register a domain and pay for some maintenance and hosting.  The rest of the work is done by volunteers.  Looking at the financial statement (of which I learned from Google+) of the Journal of Computational Geometry, it could take as little as $10 per year.  Heck, we don't really need universities to pay for it.

Yes, it really costs very little to run a journal these days if you do it right.  There's no need for readers, or authors, to pay huge sums to middle-men.
Posted by Lev Reyzin at 12:11 PM

Email ThisBlogThis!Share to TwitterShare to FacebookShare to Pinterest
Labels: academia