In its recent Janus v. AFSCME decision, the Supreme Court struck down public sector union security agreements.  This relates to my professional life because UIC is a public university, and our faculty are unionized.  I also have an interest in constitutional law, and I finally have a "jurisdictional hook" to blog about it.  Moreover, I recently realized that while I often hear from pro-union faculty and various union representatives, I rarely see other perspectives, at least at work.  So, as a union non-member, I thought it might be useful to give some brief thoughts about the issues involved. 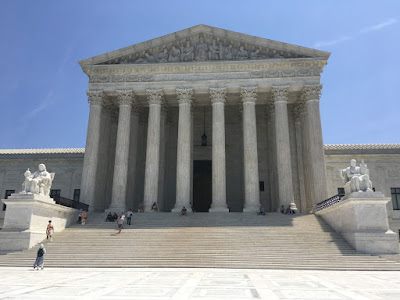 a photo I took of the Supreme Court building during a recent visit to D.C.

In Janus v. AFSCME, Janus challenged the constitutionality of charging public sector employees "fair share" agency fees.  In about half of the states (those without "right-to-work" laws), when a workforce became unionized, unions were allowed to negotiate security agreements, which gave them the power to collect agency fees from non-members.  The Supreme Court held that these agreements violate non-members' first amendment rights by forcing them to subsidize political speech they disagree with.  Unions were already not permitted to compel non-members to pay for the portion of their activities that are overtly political, but the Supreme Court ruled that in the public sector, union bargaining is inherently political because the unions negotiate with the government, which impacts public policy. Especially illuminating was one particular exchange from the oral argument, between Mr. Franklin, the Solicitor General of Illinois, and Justice Kennedy:


Mr. Franklin: ... Independent of that, we have an interest at the end of the day in being able to work with a stable, responsible, independent counterparty that's well-resourced enough that it can be a partner with us in the process of not only contract negotiation -­

Justice Kennedy: It can be a partner with you in advocating for a greater size workforce, against privatization, against merit promotion, against -- for teacher tenure, for higher wages, for massive government, for increasing bonded indebtedness, for increasing taxes? That's -- that's the interest the state has?

Whether you buy this argument or not, you only have to look at the budget crisis in Illinois to understand the concern.

Turning to my own experience, when I first arrived at UIC, the faculty had just unionized.  And while UIC is not the only public research university with a unionized faculty, I viewed unionization as a worrisome development.  It especially seemed to me that tenure-track faculty at an R1 university should be able to negotiate on their own behalf when the need arises.  My concerns were further reinforced when two years later, a faculty strike almost coincided with our interviewing faculty candidates.  Imagine trying to convince someone to join your department with your colleagues holding "unhappy faculty on strike" signs.  Moreover, I thought it would be detrimental for faculty to have to worry about possible repercussions of teaching during strikes or to face potential political pressure from colleagues to join the union.


As I already mentioned, I never joined the union; but on occasion, various union representatives have tried to get me to join and invariably made the following pitch: "You're going to have to pay the union anyway, so why not sign the membership card and have a say?"  The union wants to keep the majority of the bargaining unit as members in order to avoid facing a credible decertification effort, and thereby wants everyone to join.  And non-members were incentivized to join even if they didn't support the union, so that they could have some say in their contract.  To me, this argument for non-members to join the union seems as objectionable as the impetus will be for members to become "free riders" in the post-Janus world.

So what will happen now that security agreements are struck down? It's hard to predict.  I don't know if it's possible, but I'd like to see a workable middle ground emerge. A compromise, for example, that allows workers to unionize and allows unions to charge, represent, and negotiate on behalf of their members only, while leaving the non-members alone, might be one answer.  I hope there are also other interesting possibilities to consider.  Whatever happens, the status quo is about to change, and I envisage for the better.
Posted by Lev Reyzin at 11:00 AM